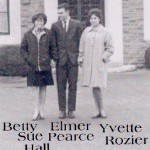 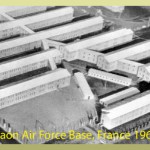 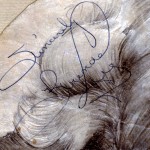 The year was 1963, place France, and I was a junior in High School. Dad was in the Air Force stationed at Laon Air Base. The base did not provide a school. Each Sunday we were shipped out by shuttle  to Verdun for the week. On Friday we were back on the bus headed to Laon.

One weekend, I was invited by a class mate who lived in Metz to spend the weekend with her and attend a Brenda Lee concert at the Officer’s Club.  I prepared myself with a head drawing of Brenda (time was short) to hopefully get her autograph. The concert was wonderful. I did not get to meet Brenda but did get my autograph, thanks to her manager, Dub Allbritten.

Fast forward to 1970, Sunday afternoon and the phone rings, the voice on the other end was Brenda Lee. There had been an article in the Nashville Banner about my artwork. She had seen it, like it, and called to see if I would do a family portrait for them. Was I thrilled? Oh yeah! When I met with  her to discuss the portrait she wanted I brought along the drawing from 1963 she had signed. She could not believe I still had the art and in good shape considering how much we had to move. She did remember putting her autograph on the piece.

Side note: Away all week at school, our meals were served in the mess hall. The cooks were Air Force service men. One young Private that stood on the line at each meal and served us was a young man by the name of Frank Zappa…yes that Zappa.