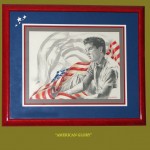 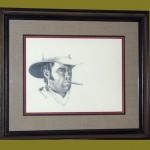 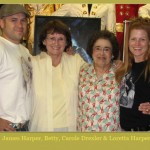 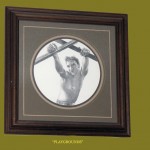 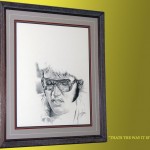 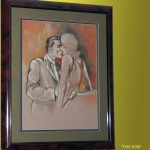 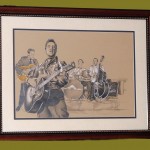 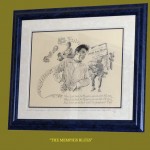 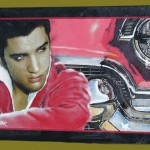 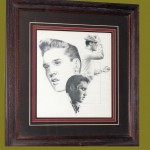 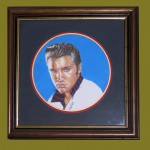 In August 1987, I was taking my 10th consecutive trip to Memphis to exhibit my art during Elvis Week. Though, I had been exhibiting my drawings for years, they had never been for sale. Little did I know that this year was going to be different. While I was sitting in the lobby of the Roadway Inn on Airways discussing my work with the Fans, in walks Carole Drexler, a longtime Elvis fan from California . Carole came to the show and was interested in one of the drawings titled, “Loving You”. I thanked her for her interest in the drawing but informed her that they were not for sale. I had been drawing Elvis since about the age of ten, every day of my growing years were spend rendering his image. Every thought I ever had, every feeling I ever felt, went into those pictures and to sell one was like giving away a part of my life. Now here was this lady that wanted to own one, I had to do some serious soul searching.

Later Carol spoke with a friend and told her what I had said. Her friend encouraged her to approach me again, which she did, day after day. Through her persistence, I started thinking that maybe I should let her “adopt” this piece, she loved so dearly. I decided if she came and inquired about the drawing again, I would indeed let her have the art. Carol showed up once more and with a heavy heart I let her take the art home. She was so happy and nervous that when she made out the cashier’s check she wrote, “Carole Harper” instead of Drexler.

Since that time Carole has acquired an extensive gallery of her own Betty Harper original Elvis artwork, and her collection continues to grow. Since Carole broke the ice many fans have massed their own collections of my Elvis art. I love what I do and especially drawing Elvis and exhibiting them for the fans to enjoy. The fans have always been so supporting of me and my artwork and I greatly appreciate it.