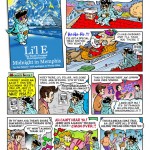 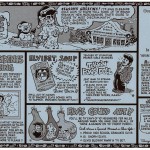 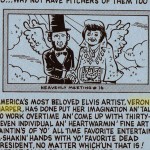 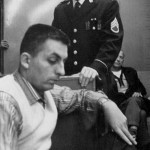 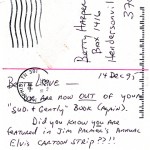 Taking the time to purge files is something like spring cleaning, a necessity but not always them most fun. My problem with going through files is getting side tracked by the items I encounter – spending time wondering down memory lane takes more time than purging. Spending time wondering WHY I kept a particular piece and most time forgetting they are even there. So if I needed something I would be hard press to remember where I put it.

This week I found myself, once again, engaged in sorting through endless files deciding what to and not to keep. One item I came across was a postcard from Elvis World publisher, Bill Burk with the message….”We are now OUT of your “Suddenly & Gently” book (again). Did you know you are featured in Jim Palmer’s annual Elvis cartoon strip??!!….Bill, 007. Well I did not remember the postcard so obviously I did not have any recall of the Jim Palmer cartoon so I decided to go searching to see what, if anything I might be able to find about Jim and the strip Bill was talking about. In his cartoon Jim referred to me as “Veronica Harper”. I was curious.

Of course I had a sudden “Google” moment and found Jim so I sent him an email never knowing whether anything would come of it…..but I received an answer. Part of his message read…I’m attaching a couple more recent Christmas LI’L Es. Also, should you be interested, there are more samples on my website: jimpalmercartoonist.com , as well as other cartoon work I’ve produced. For many years, LI’L E has appeared only on my annual holiday card, but I still love doing it. Please let me know any reaction you should receive, positive or negative.

Jim Palmer was born in 1941 in the East Texas town of Joaquin. He is a self-taught artist, attended college at Stephen F. Austin State (now University) in Nacogdoches, TX and graduated with a degree in theatre. He become interested in cartooning when he met two of the most accomplished editorial and sports cartoonist in Texas, Herc Ficklen and Bill MClanahan of the Dallas Morning News.

Jim is a cartoonist, illustrator and actor. His comic strip feature, Li’l E: The World’s Youngest Elvis Impersonator, has appeared in a number of music publications. Jim has provided comic panels, strips and other art for magazines and newspapers, including Writer’s Digest, Memphis Star, Children’s Playmate, Crusader, Dateline Memphis, and Bonkers. He has also illustrated books for Scholastic Teaching Resources and Evan-Moor Educational Publishers.

Needless to say I refiled the postcard from Bill as well as the cartoons that Jim sent me.