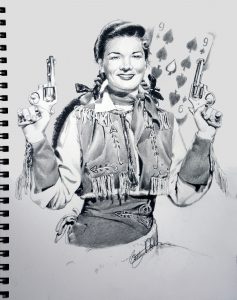 Davis made her first movie in 1947 and appeared in 32 motion pictures. From 1955 – 1957 she filmed 87 episodes of Annie Oakley, making the loveable cowgirl the only exception to the rule of TV westerns at the time. In the early days of TV there were some 30 weekly westerns, ALL with male stars! Except, of course, for Annie. All men, (1) woman.

Women on television in the 1950s were generally married: I Love Lucy, Leave it to Beaver, Ozzie & Harriett, Blondie, Father Knows Best, Donna Reed, I married Joan, etc, etc, etc. Long before the “Mary Tyler Moore Show” and” That Girl”, there was Davis who was single, with no children, not even with a boyfriend, and HAPPY.

Davis stood in stark contrast to all the contemporary westerns. Annie defied the stereotypes of the 50’s with her value of fairness, justice, non-materialism and tolerance. She fought for those treated unfairly or persecuted because of race and ethnicity. Annie had to deal with the same ruthless characters – rustlers and killers that the cowboys dealt with – and she did it without ever killing one of them. To her character guns were not for killing people but to protect lives and as a defense weapon.

Davis herself was a superb horseback rider and marksman, later touring with the Gene Autry rodeo. She did most of her own stunts; there were no stunt double men in wigs. With her supreme athleticism and natural charisma, Davis was the answer to a dream of Gene Autry’s to have a female role model that matched his own rodeo prowess and stage talent. Autry said. ..”little boys have had their idols from the beginning of the picture business, why not give the girls a western star of their own?”   Davis was the living embodiment of what it meant to truly believe in and follow one’s dreams. This was a theme that could be seen in the show as well as Oakley remarked in one episode, “You have to dream things out before they ever become a reality, where there is no vision people perish”.

Further to the production of the 87 television episodes, Dell comics produced 16 issues of Annie Oakley and she sold records, costumes and toys to the tune of nearly a billion dollars in today’s currency. Regardless of this success the advertising department had difficulty selling advertising for the show, which was necessary to keep it on the air, there was not enough belief in a female lead show even though she was a merchandise bonanza.

Davis made her last television appearance in a 1961 episode of The Andy Griffin Show titled “THE PERFECT WOMAN”. Her last public appearance was 1994 to receive the Golden Boot award for the Motion Picture and Television Fund. In 1997, Gail Davis tipped her cowgirl hat one last time as she bid the world adieu in Los Angeles, California, at the age of 71. In 2004 she was inducted posthumously into the National Cowgirl Museum & Hall of Fame in Fort Worth, TX. Her exhibit at the Cowgirl Hall of Fame recalls her impact on young girls through the Annie Oakley series.

“Back then I knew the show was having a positive impact, especially on little girls. It wasn’t until years later that I realized just how much. Little girls had turned into influential women, thanking my portrayal of Annie for showing them the way.”……Gail Davis

Why am I writing this now? Well, in my career as an artist I have drawn many people, besides Elvis, but all of the western art I have created has been of male wes 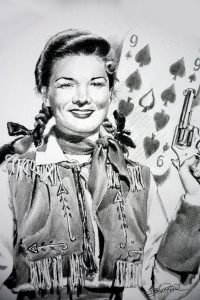 tern heroes. I did a series called “We Had Heroes” – Roy, Gene, Lone Ranger, the list is endless – and never once did I consider drawing the one person who had more of an impact on me as a little girl than any other western hero. Recently I had the pleasure of seeing a Reba concert in Vegas and during the show she discussed her time on Broadway in “Annie Get Your Gun”. She spoke of watching the TV show and how she was Annie Oakley’s biggest fan. I sat in the audience thinking whoa, wait a minute, I’ve always been Annie Oakley’s biggest fan. But then I stopped myself. How could I be her biggest fan when I haven’t even drawn a picture of her?! So as soon as I could get to a pencil and paper, I went to correcting that little oversight.

I often contemplate an idea for some time before actually executing the image. The thoughts take many twist and turns before I am satisfied with what I want to do, or think I want to do. By the time I make them a reality all the thoughts and feelings I had about the project are worked though and I can stand back and decide if the result is what I wished to portray. That said it has taken me much too long to do this drawing of Gail Davis as Annie.

Did quite a bit of research before writing this so thanks go out to:
Google
David the Bruce (YouTube “TV’s Forgotten superhero”)
A VERY special thank you to Jasmine Rochelle… www.lula1892.com  lula_1892 (Instagram) for all of her help.